It was whilst negotiating the purchase of a ‘Ferrari red’ MG TD recently, that life-long ‘Petrolhead’ Athenaeum Proprietor David Cox met and became friendly with Six times Champion Ferrari Racer John Pogson.    Although living his life mainly in the fast lane on four wheels, John had always had a soft spot for the Avro Vulcan bomber, admiring its sheer power and performance.   David Cox in a previous life just happened to have piloted the Vulcan on many occasions.  So with a few contacts still in and outside the RAF, David arranged a Vulcan Experience for John at Doncaster Airport, a day John says he will always remember.    Returning the ‘favour’ John Pogson has kindly agreed to regale Athenaeum Proprietors and their guests with anecdotes of his ‘Petrol Powered’ life and times, which will be illustrated with contemporary images.

John Pogson is the founder of Ferrari independent specialist, Italia Autosport based in Holmfirth, West Yorkshire.

The Huddersfield born engineer trained at Ramsden Technical College in the early 1970s and in 1975 he got his first job at Huddersfield Garages, a Mercedes and Ferrari dealer, Outlane and was lucky enough to get his hands on some of the first Ferraris in the North. From there John’s love of Ferrari grew and after training at the Italian company’s famous Maranello headquarters he eventually launched his own business in 1991. With customers coming from not only all over the UK but also internationally as far away as Australia, John claims the success of his business is down to decades of experience and doing things the old fashioned way. Claiming that today in 2019 it’s almost impossible to get a Ferrari skilled mechanic that will work to John’s level, this garage’s success is down to old fashioned standards.

John and his team also are well known for the restoration work they carry out on these cars, taking pride in the patina and originality, and have gone on to win first place at many Concours d’Elegance events. The attention to detail and amount of passion that goes into Italia Autosport restoration work is recognised far and wide. John’s opinion on the matter is; “A Ferrari will never die, you can wreck it, it can be rusty, we restore it. We restore automotive art!”

But John’s passion for Ferraris isn’t just limited to the workshop. He is also an international racing driver and has notched a host of titles and trophies at tracks including the Nurburgring, Monza and Donington. Winning 6 Championships driving cars like the Ferrari 355 and Ferrari F40, John has many a ‘campfire story’ to tell of battling alongside other drivers in the fight for first place. “We don’t go racing to come in 2nd place!” he’ll tell you. The life of a racing driver came about through a client who was going away to America and suggested John race his car at the famous Spa circuit in Belgium. John went to Spa and won both races over the weekend, caught the bug and went on to develop an incredibly successful racing career; 6 Championships and a 47% race entered to win ratio.

More recently, John has used his wealth of knowledge of classic cars to create a set of online videos, each starring a different vehicle, with John’s no-nonsense narration; they have been quite a success.

For John, this is not just a job, but a way of life. He lives and breathes Ferrari and with a rich career not only in the hands-on, mechanics of these beautiful machines but also at the heights of success racing the cars, he certainly has a story or two to share!

The evening will be accompanied by a champagne reception and a two-course dinner. 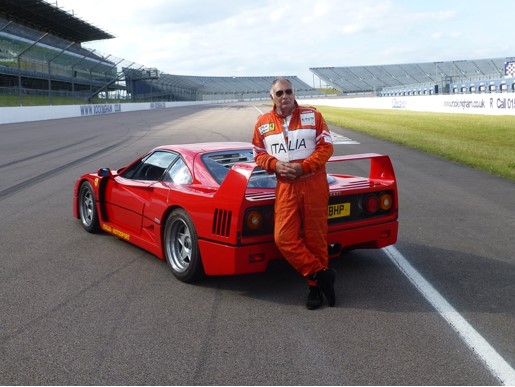