We have unearthed some more strange and unusual treasures from Robert Gladstone’s collection. A large amount of parchment slips written in Latin and relating to the late 16th century found in a shoebox!

What are they? Luckily I had Dr Hollinshead and Mrs P Cox to help me solve the mystery. It seems they are receipts/dockets signed by the four Tellers of the Receipt of the Exchequer. 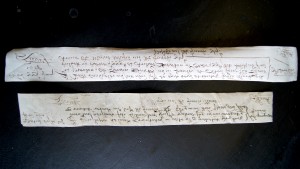 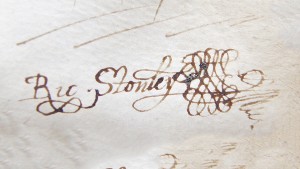 Dr Hollinshead researched the role of the Teller:

The Tellers receipted money paid in, noted the amount in a book, and sent a copy of the entry (called a Teller’s Bill) to the Tally Court so that a tally (reckoning) could be made. At the end of each day, money that had been received was removed from their chests to be deposited in the Treasury.

The Auditor of the Receipt of the Exchequer was responsible for filing and entering the Tellers’ Bills and certifying the monies received to the Lord Treasurer. In the later 16th century the title of Auditor was combined with that of Tally Writer. Again, this office was abolished in 1834.

The Athenaeum dockets all appear to relate to widely different parts of Cheshire and Chester city at a time when the county was a County Palatine with its own royal offices and administration.

The signatures on the slips relate to each of the four Tellers, however, one signature stands out more prominently. Richard Stonley was Teller of the Receipt of the Exchequer between 1554-1597 and was found guilty of embezzlement to the sum of over £12, 600, the equivalent in today’s money of £1,578,654.00. He is also the earliest known purchaser of a Shakespeare work having purchased Venus and Adonis on 12th June 1593. When his illegal activities were found out he was given a reprieve by the crown to sell all he owned to pay back the debt. It is thought he died in prison in February of 1600.

We have already had some interest from researchers into this collection and Ashleigh Hawkins a student studying an MA at Liverpool University will be transcribing a selection of the receipts and using them in her dissertation.

If you interested in the receipts or any other archive collection featured, please email archivist@theathenaeum.org.uk to make an appointment to come in.