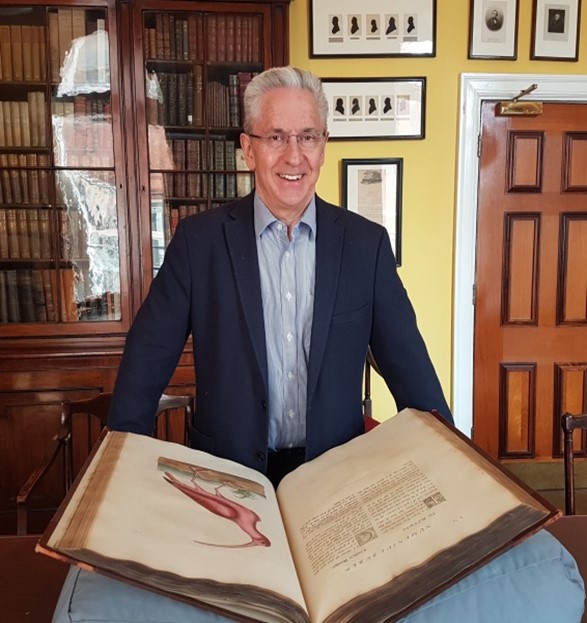 Every Monday we profile one of our Members. This week in we are joined by Proprietor 492 Dr Robert Huxley.

The views and opinions expressed in this article are those of the author and may not reflect those of The Athenaeum.

I retired as a Principal Curator after 28 years at the Natural History Museum, London (NHM) but am still active as a museum consultant and trainer. Like many retired scientists I also write and publish about the history of natural history and most recently about the much drier topic of strategic management of natural science collections!

My early years were spent in the small streets by Penny Lane railway bridge in what was then Wavertree, L15 and is now L18, Mossley Hill although my mother used these interchangeably depending on who she was talking to!   Several moves around the country brought me back to Liverpool to study life sciences at the University before heading off into marine biology research. After floating (excuse the pun) between short-term contracts I realised (or maybe was told) that my talents lay elsewhere, and I moved into the museum sector eventually landing a dream job at the NHM.  Most of my wonderful times there were spent leading the team managing one the world’s largest botanical collections, keeping my hand in with some contract research and developing various international networking and staff development projects.  Following retirement and other life changes I made the decision to return to Liverpool in 2015 to a small house less than half a mile from where I began. This was a decision I have never regretted not least because I met my partner Maria who I can thank for many things not least my becoming a Proprietor! (see below).

Bringing together a team of co-authors and publishing “The Great Naturalists” with Thames and Hudson in 2008, a beautifully illustrated series of essays bringing to life the often-colourful characters behind natural science/biology and its underpinning collections. It has been published in 10 languages and was reprinted in paperback last year.

I am a quiz geek and have competed, fairly unsuccessfully, in a few TV shows over the years. I once beat comedian and “Chaser” Paul (The Sinnerman) Sinha in “I am an Egghead” but was beaten in the next round by Pat Gibson now one of THE “Eggheads”. OK, I wasn’t able to give up the day job, but I feel I acquitted myself reasonably well as an amateur!

What brought you to the Athenaeum?

My partner, Maria.  It was close to my birthday and I was brought into town to get a “surprise present”. As we turned down Church Alley I assumed I must be going to something at the Bluecoat but then a swift right turn and we were in the Athenaeum on Open Day. I was handed into the charge of the highly entertaining Ken Orme, met the delightful David Maddison and to top it all got a glimpse of a library of treasures including highly significant natural history books! I knew immediately this was somewhere I wanted to be, became a Proprietor, a library steward and a member of the Library Advisory Group. One of the best decisions I have made in recent years.

Not a lot but I wonder if the institution hides its light under a bushel a little and not just regarding the many benefits of membership. The library is making great strides forward and it would be great to raise its profile further and see more people (internal and external) using it. Could there be more opportunities to exploit for income generation whether it be through postcards, prints or reprinted pamphlets?

One change which is probably beyond our control without installing expensive double glazing would be to turn down the over-amped buskers who intrude into our haven of peace. Or does that sound like an “old buffer”?

Do you have any Athenaeum memories or stories to share?

I particularly enjoyed one of the opera evenings held a couple of years ago. Some wonderful singing and a great opportunity to chat to the performers over dinner.

Do it!  It is not a stuffy place with old buffers snoring in high-backed leather chairs but a vibrant, friendly place with opportunities to converse and socialise with people from a broad spectrum of backgrounds and interests.  To get the most out of it I would recommend getting involved in our groups and activities. But if you want, sit, relax and read in a comfortable environment. And… gain access to a wonderful library of course!