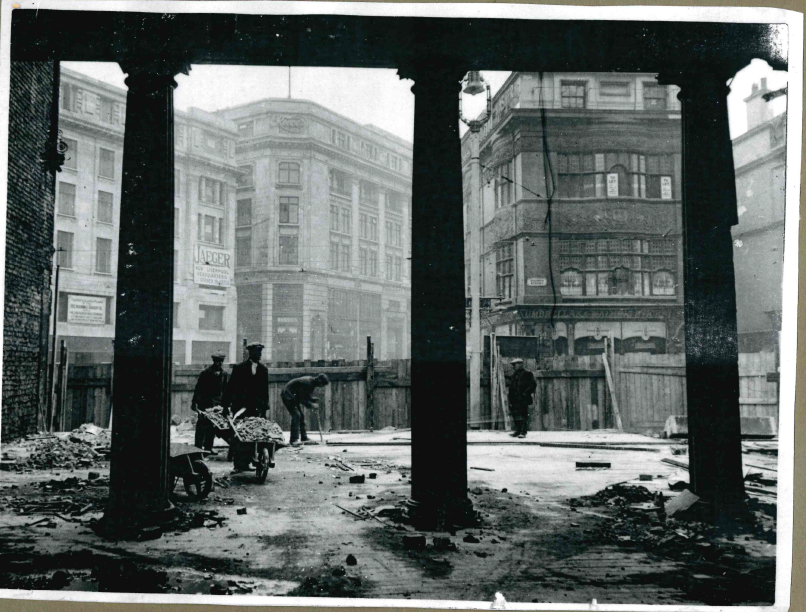 An interesting Chronicle today about what could have been.

Yesterday evening a twitter user tagged the Club in a post of theirs, which led me to look through some of the older images of the Club, and subsequently, pictures of our previous premises on Church Street. I find with pictures, particularly older ones, it’s easy to very rapidly get sucked into a rabbit hole of nostalgia or imagination depending on the image. In this case it was the latter.

The picture that I ended up focusing for far longer than I should have was taken in the late 1920s or very early 30’s from inside the original Athenaeum building during its demolition. All of the opposite side of the street and also the buildings on Parker Street that are visible in the photograph are still standing today. From there you can pinpoint that our Club used to stand round-about where the O2 shop and Cotswolds do currently. In the ’20s when the council decided that Church Street was going to be widened for the trams what would the Athenaeum have looked like today had they decided that the opposite side of Church Street?

We are blessed with glorious architecture in Liverpool. It’s a miracle that people get from a to b safely without crashing into another pedestrian who’s eyes are also fixed firmly upwards at the grand facades of buildings. I often wonder what is inside these great buildings strewn across the city. I suspect the majority are offices, hotels, or apartments but that isn’t really exciting enough for the imagination. Maybe it’s because I’m losing the plot, but I always seem to envisage that two or three stories above the storefronts their modern usage stops, and all above is lost and frozen in time. Reverting to their original purpose, whatever that maybe, but dusty, old and unused. A frequent trigger to me losing the plot and imagining this is the building in the image between the left and central pillar. As mentioned, it is still standing today, and until recently housed a Tesco on its ground floor. Whenever I walk past I still look up and wonder what is above, and perhaps if a decision went another way, this could have been the Athenaeum’s new premises?…

It is true, should a decision have gone another way it could have been our new home back in the ’20s! About a year or so ago I was looking through some of the Athenaeum’s older documents and found a folder titled ‘Church Alley move’, this was not the folder I was looking for but with my appetite suitably whetted I dived in. The folder contained correspondence between the Athenaeum and the Council as to possible alternate premises and in the early 1920s several floors within that building on Parker Street were offered to the Club. After deliberation it was turned down as its square footage was comparable to the old building, the forward-thinking Committee knew that the move was an opportunity to improve the Club and the space offered did not fit in with this plan. We know the rest of the story and are blessed with our Church Alley home, but ‘what if’, at least to me, is always an exciting question to ponder.

Lastly, moments before publication I received correspondence from one of our members who had been a part of something which ‘Might have been of interest’, I thought a fitting home for it was below. Enjoy!

Musicians of the Royal Air Force, including the Athenaeum’s own Tom Crowley, have proven COVID-19 will not cease their music, putting together the below piece to commemorate Captain Tom Moore’s 100th birthday. Captain Tom has inspired the nation and beyond in his fundraising efforts, in doing so has now raised over £30,000,000.00 for NHS Charities!